Contrary to popular belief, baboons can learn new tricks beyond dung flinging, character assassination and doc dropping. These tactics are not confined strictly to FfTB, but seem to be becoming more prevalent with many people who's mission in life is to conflate atheism/skepticism with some kind of ideological derangement and force the hybrid on the rest of the community. Recently, some have discovered the power of DMCA and they have been abusing it with the glee of a child who's found two pots to bash together. DMCA is particularly useful against targets who are resistant to harrassment by conventional means. The only surprise about this development is that it has not been used earlier - it is after all merely a variant of the usual crying wolf routine that sustains much of FfTB and Skepchick. Whilst there is currently no evidence that FfTB or Skepchick are directly involved with these abuses of the DMCA process, the incidents so far have been targetting people currently involved in active criticism of recent FfTB/Skepchick controversies.

Filing false DMCA takedowns are not consequence free. From Groklaw -

However, some people abuse the DMCA system. Despite not having a valid claim of copyright infringement, a person who wants content taken down may send a takedown notice anyway, in order to have material they find offensive, defamatory, or otherwise objectionable removed, or simply to harass the person responsible for the account which will be affected by the DMCA notice. What many who abuse the DMCA system do not realize is that they can be sued and held civilly liable for the havoc they wreak by sending these fake notices.

Others are more blunt and equate false DMCA requests to perjury.

The attacks against girlwriteswhat are odious even by baboon standards - they are not intended to silence her, but to force her to divulge her full personal information. Is there any reason for wanting to do this other than if other real world harrassment is intended?

The nutshell summary is that GWW received two DMCA takedowns on Youtube within minutes of each other. A third would entail instant account cancellation. The logic seems to be that with her account in peril of destruction, she would challenge the takedown notices - which entails providing full personal details, including physical address and phone numbers, to the originator of the complaints.

She explains in her own words - 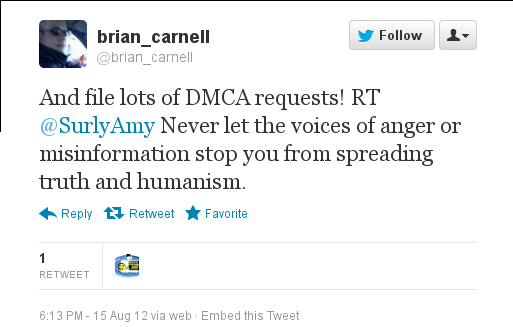 Although it is not clear as to whether 'Surly Amy' filed a DMCA complaint against Justin Vacula, a post from his blog "Surly Amy: Conferences should ban 'fake jewelry' " which had offered criticism of 'Surly Amy' had been the target of a DMCA request . The post included a picture -- with a caption -- of a "This is what a feminist looks like" Surly-Ramics necklace. The criticism in the post directly related to various assertions 'Surly Amy' made -- in line with her feminist ideas -- such as conference organizers should ban 'fake jewelry' (presumably non-Surly approved jewelry).

Vacula, responding to the DMCA, wrote,

"I'm not going to be bullied by people who file DMCA complaints which results in censorship and may result in my entire blog being taken offline. I have responded, as Google afforded me to, arguing that my use of the Surly-Ramics image in my post was fair use. Again, no matter what you think of me or 'Surly Amy,' filing DMCA complaints which result in censorship is unacceptable. It's ridiculous that this post even has to exist within a community which is -- last time I checked -- opposed to censorship of dissent."

Despite being asked on Twitter and large attention drawn to the issue, 'Surly Amy' has neither confirmed or denied whether she filed a DMCA complaint. In line with usual FTB/Skepchick tactics, one particular blogger , 'The Mad Skeptic,' was blocked by 'Surly Amy' on Twitter...not before being the recipient of abuse and name calling. It's only uncalled for, as we know, when it's directed at women. He writes,

"Well, I wanted to clear this up. Instead I was treated like one of the "others". Not only was I accused of being a Twitter stalker of some sort but also a "hater" and later a "dick" and "asshat" when someone (troll) not directly involved with the conversation (and who later made unsupportable claims and attempted to construct some non-sequitur argument that was basically: because I asked the other a critical question regarding the DMCA, I was automatically a misogynist because of guilt by association) chose to chime in and give their two cents and then troll me for the better part of 2 hours. A weak legal threat was also implied if I didn't stop my particular line of questioning.

Vacula has since filed a counter-complaint .

Community content is available under CC-BY-SA unless otherwise noted.
Advertisement