On February 6, 2012, Penn Jillette posted a comment to the facebook wall of a friend, Emily Simon. In this post, Penn called comedian Lindy West a "remarkably stupid cunt", and a "fucking talentless cunt", in response to what he considered a substandard article poking fun at Superbowl commercials.

In comment #111 on the original Slog article which broke the story, Emily Simon, an acquaintance of Jillette's, stepped in to clear up - for the one person who actually bothered asking - the original source of the comment which, up to now, had only been available in easily-fakable screen-cap form.

She verified that it was a comment from Penn, which he had posted to her on her facebook wall. Perhaps mindful of the nature of a baboon feeding frenzy, she added:

Lindy has every right to share it, and I’m sure Penn won’t mind it being made public. But if this information becomes wide-spread, my hope is that the context travels with it.

Of course, given the infinite precedents, the chances of "context" being retained by anything that FfTB chooses to pillory is nil. Accurate "context" is anathema to yellow journalism. Instead, the baboons latched onto this:

Also, whatever you may think about the words Penn uses, I may very well think the same things. But I’ve been privileged to see how he actually behaves with at least one non-virtual woman, and he’s a good man when he doesn’t have to be. When it doesn’t benefit him at all. When no one is watching.

His public persona is for public consumption and you all have your right to your opinions about it, but I’ve never been treated less than kindly by him, and he’s had plenty of opportunity. Please take that into consideration when judging his overall character.

The fact that not only did she not instantly castrate Jillette, but had the nerve to defend him, only served to fuel the fire, and McReicht and clan decided she was now fair game.

Apparently distrusting the evidence at least two users decided to go the source and actually ask Jilette himself, directing their questions at his verified twitter account.

In response Jilette denied it was him, saying that "they pulled it from someone else", and when asked if for clarification on whether the comment was not posted by a facebook account that he owns he replies "That's correct".

This was pointed out in the comments below McReight's article, but ignored. Subsequent articles referring to Jillette as part of a "campaign of hate" narrative have not indicated that the authors also believe him to be a liar. 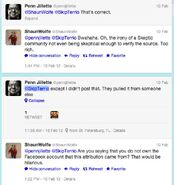 Actually asking him
Add a photo to this gallery
Retrieved from "https://phawrongula.fandom.com/wiki/Attacks_on_Penn_Jillette?oldid=6330"
Community content is available under CC-BY-SA unless otherwise noted.