Whining about people who can't take "you're wrong"Edit

Given the bodycount from Myers personal attacks on others that question his dogma, this is kind of like Hitler saying he could have got threats from Jews. 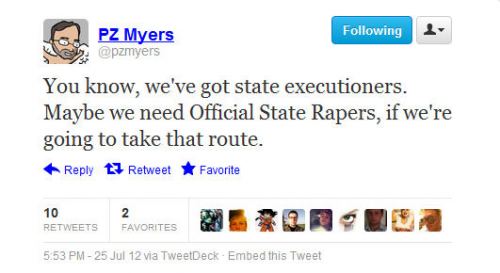 November 22, 2011 at 8:32 am PZ Myers: The hypocrisy lies in thinking that religion must somehow be exempt from that kind of examination, and I truly, deeply despise the idea that religion must be a walled garden that may not receive the same criticism as any other wacky idea.

Quite an astonishing statement to be made from within the protected confines of freethoughtblogs where there is absolute censorship control and zero tolerance for even the slightest dissent.

Swallowed by all of FFTB as something profound. Deepity is a term for conceptual nonsense coined by Daniel Dennet.

"If you’re called out on something like cissexism, racism, sexism, homophobia or whatever, please try not to get defensive or interpret it as a personal attack. Instead, try to listen to others and understand where they’re coming from. A whole lot of drama and nastiness can be avoided with simply being prepared to take a brief moment to listen, or offering a simple apology." - Natalie Reed

Natalie explains what has come to be called, the Listen-to-the-Assertion Fallacy.

PZ Myers: Liberals should stop being "being Mr and Mrs Milquetoast"Edit

Not a direct Myers quote, rather the endorsement of another's words that shows the full extent of Myers/FFTB hypocrisy -

Yeah, so? I've been doing this for years.

Blanch, you delicate souls, blanch. Somebody else finally gets it.

I'd like to suggest a very simple strategy for American liberals: Get mean. Stop policing the language and start using it to hurt our enemies. American liberals are so busy purging their speech of any words that might offend anyone that they have no notion of using language to cause some salutary pain.

I wish I knew where Americans got this idea that being a liberal meant being Mr and Mrs Milquetoast.

What a pack of cunts.

Retrieved from "https://phawrongula.fandom.com/wiki/Classic_Quotes?oldid=5640"
Community content is available under CC-BY-SA unless otherwise noted.