Revising article content and tampering with user comments, as anyone that has tried to challenge any of the narrative at FFTB can tell you, is so common place that it rarely merits a raised eyebrow. It is so commonplace in fact, that occasionally FFTB bloggers forget that comment tampering is frowned upon and is their dirty little secret to be denied at all times with indignant shock, and in rare moments of candid honesty, let slip that the practice is standard operating procedure. Ophelia Benson had such a moment -

[Update August 19. I've edited this, and I'm going to edit some of the comments. Very Orwellian; very memory-hole. Yes; too bad. I disagree with myself about much of this now, so I want to get rid of the worst of it, and thus the worst of the comments it triggered. I make mistakes. It happens.]

Admission of editing by PZ Myers:

This comment was modified by Chris Clarke to remove most of noelplum99's criticisms of Pharyngula, replacing them with a video of bunny rabbits (before and after screenshots). PZ Myers endorsed his actions on Twitter:

He also stated explicitly that it was Chris Clarke who did the editing:

Crommunist allowed his guest, HaifischGeweint, to post on his blog. In Minority (LGBTQ Edition), Crommunist admitted to tampering with the comments. Screenshots:

"There is a limit to my patience, and they've exceeded it." - Crommunist 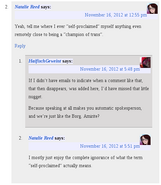 This comment (bottom of screenshot), thought to have been edited, was actually sarcasm.
Community content is available under CC-BY-SA unless otherwise noted.