Cunt- For some reason this word really offends people, maybe because of the exceptionally crude sound of the word, or maybe because talking about the female genitalia is still considered unnaceptable. Either way, people cannot seem to comprehend that it is just a word; making it a great thing to say around tight ass pussies to piss them off. [more] The word cunt is really only insulting to North Americans and over-zealous feminists who don't realise its beauty.

I hate it when people go on and on about how neutral cunt and twat are; and I take tranny to be pretty near the same thing. Once can be a cultural miscommunication; but anybody who insists on it, once informed of its US meaning, is a self-centred arsehole and should fuck back off to r/atheism or ERV’s slimepit. -- typical baboon outburst highlighting both stupidity and the arrogance of assumed cultural exceptionalism

Of all the myriad derangements that keep the subnormals of Freethoughtblogs in a state of perpetual frenzy alternating between bloodlust and self-mortification, the word CUNT has to be near the top of the list. There is a loss of rationality surrounding the word than can only be described as religious, and any utterance of the word is reacted to as a though it's blasphemous. Those that doubt that a cult-like mentality dominates the landscape at FFTB only need to search the site for the term and peruse the discussions. It is way beyond surreal. What a pack of cunts.

Thankfully, FFTB is only a minority of loons. "Cunt" is what ultimately betrays what they so strenuously deny - that FFTB is little more than a purveyor of a new puritanism, bordering on neo-Calvinism, that is bent on restoring shame, guilt and fear to sex and gender relations, and roll us back into the Victorian era.

This page collates examples of feminist thinkers and activists who refuse to submit to the word in terror, and choose rightfully to claim it as their own and use it as they see fit, as well as other miscellaneous historical and linguistic information.

In the early 1970s Tee gathered some female friends who were willing to show her their vaginas. She drew a series of cunts to educate kids and celebrate women and their sexuality. She then gathered all her pretty drawings and released the Cunt Coloring Book in 1975. Colouring, according to Tee, is a very good way for kids to learn about the female sex, “because a major way we learn to understand the world, as children, is by colouring”.

The book became a huge success and it sold better than she ever could have imagined. Although endured a lot of discussion and controversy for a while because of its title. Some conservative dudes said the title was “awful”, and as a result, the Cunt Coloring Book had to change name into the weird “Labiaflowers”.

Tee thought that the new title was ridiculous and that it demolished the whole point of the book. Nevertheless, after some years of struggle, it was eventually re-released with its original title again and the Cunt Coloring Book became as popular as it was from the very beginning. Yay! -- Caisa Ederyd, Don't Panic

Germaine Greer would like to thank melodrama queens such as the baboons for investing so much power into a word that deserves it.

Jezebel.com is known to be considered favorable reading material for many of the Skepchick and FFTB crowd. It

Ability to withstand cognitive dissonance is a pre-requisite for any FFTB denizen, but you have to wonder precisely how they can do this without heads exploding when Jezebel also prints articles such as One Rape, Please (to Go) - I Paid a Male Whore to Rape Me Because I Wanted To. The article link is from Vice, though it was originally posted on Jezebel as verified here, but appears to have vanished. Regardless, both Jezebel and Vice are to be commended for dealing with reality and not deforming it to suit and playing ostrich-head-in-sand with difficult ideas as FFTB uniformly do.

'"The ultimate sexist put-down: the prick which lies down on the job. The ultimate weapon in the war between the sexes: the limp prick. The banner of the enemy's encampment: the prick at half-mast. The symbol of the apocalypse: the atomic warhead prick which self-destructs. That was the basic inequity which could never be righted: not that the male had a wonderful added attraction called a penis, but that the female had a wonderful all-weather cunt. Neither storm nor sleet nor dark of night could faze it. It was always there, always ready. Quite terrifying, when you think about it. No wonder men hated women. No wonder they invented the myth of female inadequacy.” -- Fear of Flying

"Alas, poor cunt. I dreamed that we could rehabilitate the word and make it beautiful again. I would love to clean it up. It’s got that Anglo-Saxon brevity, but people are still shocked by the word, and find it has pejorative overtones. I only use it in conversation with people who are unshockable." -- 6 Questions interview

“A gentleman who doesn't have the physical and/or emotional sensitivity to use condoms couldn't possibly possess the self-confidence required to fully procure the infinite sounding of pleasure from the depth of a woman's being, via the endlessness of her cunt.”

“Moving from phonetics to etymology, ‘vagina’ originates from a word meaning sheath for a sword. Ain’t got no vagina.”

It is most unfair to accuse PZ Myers of being absolutely inconsistent in his actions. There is one area in which his consistency is absolute - that of hypocrisy.

In early February 2012, close to the entirety of FFTB got bogged down in a frenzy of blood lust tearing Penn Jillette to pieces over a private comment he left on his wife's Facebook wall regarding a 3rd party elsewhere that involved the rather heavy handed use of the word cunt.

Bring me the heads of Penn and Teller!

Bill Donohue has a new target: he has taken out an ad in Variety, demanding that Penn and Teller be fired, because they've been irreverent and sacrilegious towards the holy Catholic church. [...]

[quoting Bill Donohue] This is not the first time Showtime has featured a vile Penn & Teller show. In 2005, Mother Teresa was called "Mother F---ing Teresa," and her order of nuns were branded "f---ing c--ts." The year after, Jillette said on his CBS radio show that Mother Teresa "got her [sexual] kicks watching people suffer and die."

Just recently, Jillette took after me again in his usual foul way. [...]

I can guess how Penn and Teller are reacting to this: with jubilation. They make a living by poking authority with a sharp stick, and there is no better response than a spittle-flecked denouncement from a pompous windbag who reacts to every slight with a flurry of press releases and angry demands.

"Spittle-flecked denouncement from a pompous windbag who reacts to every slight with a flurry of press releases and angry demands" - in other words, in a manner completely dissimilar to how PZ Myers himself - a paragon of rationality and civilized discourse - behaves when some lower form of life dares to question his infallibility.

Of course, in an ideal world this would be a clear case of epistemic relativism that Ophelia Benson would shred with her razor sharp intellect and rhetorical ninja powers. At least she would if she knew what it meant. None of this seems even remotely unusual to any of the regular FFTB denizens.

Related: Rebecca Watson defends jillette some years earlier over a similar attack on Mother Teresa. It is unclear if "cunt" was involved (probably was), and the attack seems to have had no less punch - Mother Theresa was a hag. Deal with it.

It shows the truth - that the real meaning of a word is only as powerful or harmless as the emotion behind it.

Skepchick is now clearly acknowledged as the home of all entitled, non-sexist "skeptic" fem-bots, and they are, like really, into equality, fair "spotlight on me now!" time and all that stuff, but, y'know, also claim the manifest destiny of being treated like princesses wherever they go and spitting on any non-celebrity females they encounter like they are turds on the sidewalk. Ignorant people get confused and think they are no more than a white, middle class, gender feminist supremacist movement - go figure. Cunts.

Searching Skepchick.org yields an infinite number of hits for cunt, and most of them are exceptionalist pleading that the word is "different" to terms used for penis, "so there", and ad nauseam other nitpicking. There are also other items of interest. Just one example -

You see, a bit of a kerfuffle ensued online following the Skepchicks’ “Angry Vagina Craft Time” during a workshop at the recent Amaz!ng Meeting in Vegas. But the complaint was more over the perceived “incorrect” usage of the word vagina, rather than the fact that attendees were invited to create craft cunts [...] in Australian English, the c-word is less offensive than it is in other varieties of English. (In fact, old cunt is often a term of endearment, rather than an abusive epithet.)

Comments -
the Procrastinatrix: "I was having a crappy day, then I found out that there is an enlightened place in this universe where cunt is not a bad word. Thank you! :)
I love the word cunt. I hate that in many parts of the world it’s used as a pejorative. The idea that somewhere there is a culture that uses cunt as a term of endearment makes me all warm and happy. In my brain. What makes me warm and happy in my cunt is a whole ‘nother comment.

Thrutch: "Cunt was originally a word for a purse and applied to cavern type wells. On the other side dick and cock are also pejorative where once they were acceptable.
Perhaps these pejorative senses for normal, functional parts of the human body will only be lost when we stop thinking of sex as “dirty” or sinful."

Do you have a favorite euphemism for the vagina or the penis?
Not really. I probably use plenty of the standards — you know, "cock," "cunt," and "pussy." Nothing original.

What do you think about the whole culture of taboo surrounding the word "cunt?"
Well, it depends on the context in which you use it. I don't use it very often in my lectures. I don't think a lot about it. In other words, I think that words are powerful and have huge connotations and emotional impact on people. It's always important to know who you are speaking to and what their context is and what yours is.

Vagina Monologues - You Are A Cunt, More Or Less[edit | edit source]

Surprisingly, The Vagina Monologues theatre piece has hardly got the universal endorsement and praise that some sectors of the feminist movement would have you believe. There's a lot of pretty harsh criticism across the board for rudimentary deficiencies, such as being poorly written and less a play than a series of amateur Youtube skits. The deeper criticisms have come mostly from equity feminists gender traitors (such as Camille Paglia, and the traitor Queen herself, Christina Hoff Sommers) for issues such as reducing the entire woman to a cunt, inflammatory heterophobia, miscellaneous gross generalizations, having a "whites only" perspective, hijacking Valentine's Day to propagandize violence against women (probably because it's the only calendar day left where we are not reminded) and even lesbian pedophilia.

Naturally, this preference for the pudgy, pink, middle class and entitled things makes the denizens of FFTB give it a ringing endorsement, confirming all the biases of their manifest exceptionalism - despite its repetetive and mechanical overuse of cunt. The value of this entry is entirely in it showing FFTB double standards and hypocrisy.

There is no shortage of pro- and con- babbling out there if you google. These snippets from ordinary non-celebrity gals in the street will suffice - 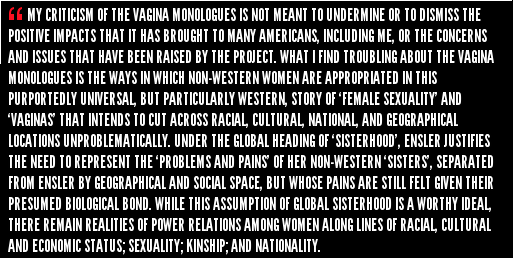 Retrieved from "https://phawrongula.fandom.com/wiki/Cunt_-_It%27s_Just_a_Word?oldid=6268"
Community content is available under CC-BY-SA unless otherwise noted.