As defined by Wikipedia -

Shunning can be the act of social rejection, or mental rejection. Social rejection is when a person or group deliberately avoids association with, and habitually keeps away from an individual or group. This can be a formal decision by a group, or a less formal group action which will spread to all members of the group as a form of solidarity. It is a sanction against association, often associated with religious groups and other tightly knit organizations and communities.

Shunning is becoming the method of choice for the new authoritarian secularism in dealing with dissent, especially when that dissent is female and conventional abuse reserved for males is deemed unacceptable. It is the method of choice particularly when there is a perception that the women being targeted may be harmed professionally as a consequence, and it is done with full conscious awareness and premeditation. In many ways this practice is also similar to political denunciation as practiced historically by police states such as the former Soviet Governance.

To date, any woman that has spoken up against the orthodox ideology being railroaded by both Skepchick and Freethoughtblogs, particularly Pharyngula, have been targeted by both shaming and shunning attacks with the intent of causing personal harm.

Most recent installment published on October 23, 2011 at X Blog by Greg Laden - 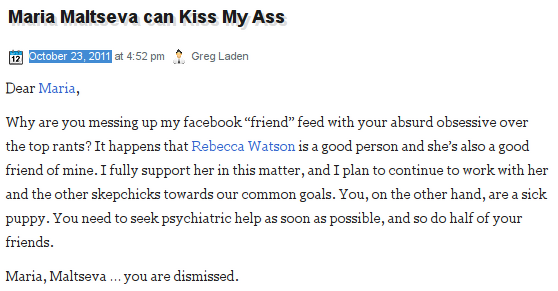 Maria Maltseva's crime was asking for a personally directed hatchet job dragging her through the mud be removed from the Pharyngula wiki. The document, which has been removed was located at -

It has been fully purged, including all former edits, and now simply reads "This page has been deleted. The deletion and move log for the page are provided below for reference." The Google cache copy is far more informative and honest (therefore not publicly visible) -

A sample of the type of material that was published -

→bluharmony is a bullshitter and accommodationist cupcake. While wallowing in the Slimepit, she had the really stupid idea of starting a petition to have activist Rebecca Watson "removed as an atheist speaker."[1]

The omission of convenience is that the "petition" was in aid of promoting other female speakers capable of staying on topic and relevance, and having intellects and backgrounds to support it, that are consistently overlooked. The rest of the article degenerates into more harmful insinuations of Bluharmony's character.

Far more direct shunning and shaming is being applied relentlessly at Abbie Smith and ERV (which is the slimepit referenced above, complete with guilt-by-association blacklist) for the crime of being successful and independent and distancing herself from the groupthink exhibited by the collective mass of Freethoughtblogs. Ophelia Benson has established the habit of publishing snippets and user commentaries such as the following on close to a daily basis -

October 2, 2011 at 12:11 pm Ophelia Benson: That was that, but I saw this morning that James had flagged up his recent FK post on the subject on Abbie Smith’s thread (the one full of “cunt” and “fucking bitch” and all the rest of the thoughtful, non-sexist vocabulary), so I read/skimmed it.

Rorschach says: October 3, 2011 at 12:46 am''and presto; ERV is now in the same category as people sending death and/or rape threats. She has allowed it to go on for 3 months, and has proudly called it her “monument”. That makes her an enabler of those who have sent threats to Rebecca Watson, asked for her to be dropped from speaking engagements and stalked her on the internet. Which part of that do you not understand, dimwit ?
All it would have taken for Abbie is one “sorry you guys, but this is getting a bit far, and I can’t really support that kind of thing”. Instead, she keeps cheering on her retarded mob of internet losers in their quest to make Watson’s life miserable. It’s inexcusable.

And much, much more of the same. Note the equivocation of Abbie Smith to someone who condones rape and death threats. Similarly, Ophelia Benson has also compared those who criticise Rebecca Watson to car bombers.

Ophelia Benson's modus operandi is markedly different to the full frontal assault on Bluharmony, and is far more insidious and persistent. Rather than large single defamatory articles, Benson relies on a large volume of small damaging snippets - the ultimate aim is to poison Abbi Smith's reputation by poisoning Google, so that it will not be possible to locate information on Abbie without running into references to "cunt", "rape apologist" and worse.

Ophelia Benson does not seek to merely harm - she seeks to destroy.

It should be noted that the Rorschach referenced above also attempted, in a massive blast of hypocrisy, to launch a complaint campaign against Abbie Smith to effectively censor her blog and, if possible, have it shut down entirely -

- and also used Freethoughtblogs/Pharyngula for this purpose -

I do think that the buck stops with Abbie Smith, those other clowns don’t have blogs that anyone reads unless they can promote their shit via ERV, so if she closes comments, the haters will fade into obscurity. If it takes a campaign to NatGeo to achieve that, I’m in.

It needs to be noted that PZ Myers made no objection whatsoever to his blog being used to mount censorship and revenge campaigns against others in the community.

Community content is available under CC-BY-SA unless otherwise noted.