"I mean, finding humour in assault is pretty fucked up in the first place." (Pharyngula: Victor Ivanoff is a slimey stalker)

However, strange SallyStrange had previously said, on November 28, 2011:

"The Onion is the only place where I've seen rape jokes that were actually funny." (Pharyngula: Episode CCLXXVVIII....)

Yes I know, it's not much. But lack of consistency is always worth pointing at. Of course, given that the Onion article in question was founded around an anti-rape standpoint, it's not really "humour in assault" in the first place.

Of more import, and what is consistent, is that the first FfTB thread of comments linked to above, in part, makes claims that Franc Hoggle was making jokes about assaulting people. No inarguable citable instance was produced. This is a further example of the FfTB version of the Big Lie technique where through constant repetition, a falsehood eventually attains a status of tacit truth. This is also a variation of the historically successful Blood Libel style attack. In the case of female critics, this also manifests as the gender traitor and collaborator denunciation.

Since Thunderf00t's expulsion from FfTB, he has continued calling them out for their unethical and dishonest behaviour at his WordPress blog. SallyStrange has been a relentlessly prolific commenter there, and provided a particularly curious exchange in the following blog item in response to an alleged "threat" - 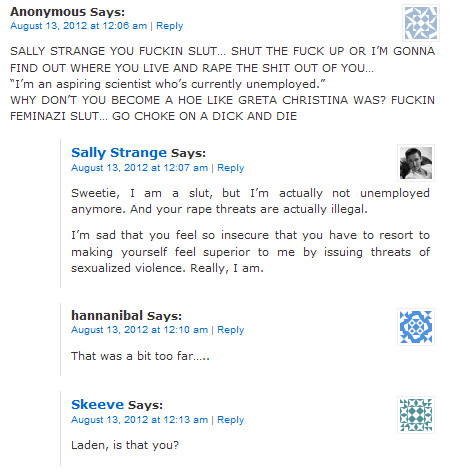 There was however something unusual with the comment exchange - the time stamps. It was noticed in a followup comment in the same thread - 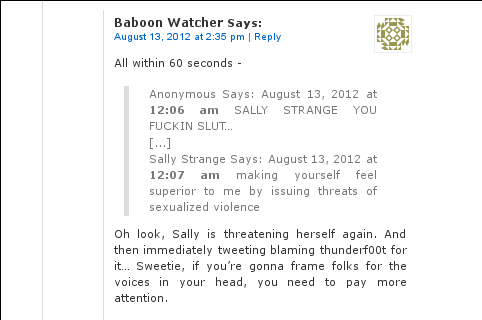 What is one to make of this? Really? All in one minute? It's really a question to ask Sally. After all, she does keep drumming lessons in ethics and morality into all who oppose the FfTB party line. Naturally, she must live up to same lofty expectations she demands of others. Must be a time wormhole. Or something.

The content under the heading Manufacturing drama at ... (immediately above) is unsubstantiated hearsay and speculation, and has never had any legitimate or verifiable evidence to back it up. And, so far as I can remember, it has been reasonably and successfully rebutted elsewhere. I cannot remember where, or at the moment find, the effective rebuttal, so for that reason alone I am going to leave the comment as is, for the time being.

Nonetheless, I think the content should be taken with several grains of salt as being highly suspect, somewhat slanderous, and without verification of any kind whatsoever beyond "I say it's so; therefore it's so". Not exactly the best form of critical thinking I've ever come across.

Retrieved from "https://phawrongula.fandom.com/wiki/Strange_Sally_Strange?oldid=6114"
Community content is available under CC-BY-SA unless otherwise noted.