This page documents the manufactured Amy Davis Roth ('Surly Amy') T-Shirt controversy. Have at it.

The t-shirt in question has written on the front "I feel safe and welcome at TAM" and on the back "I'm a skeptic, not a 'skepchick', not a 'woman skeptic', just a skeptic".

Amy Roth is also known as 'Surly Amy' of Skepchick fame. FfTBers chose to defend Amy and cast aspersions on TAM's policy and volunteers instead of seeing the silliness of getting upset over this t-shirt.

For now, here are some links as the discussion continues:

Dump of Amy's comment via Butterflies and Wheels (source). [editor's note: in the event of tampering by the FfTB revisionism committee see archived copies section]

"Amy’s given me permission to quote her, so here’s her account of what all that was like:

'I think one of the most hurtful things I experienced while attending TAM was Harriet Hall’s Tshirt that she wore three days in a row. I told her through tears, in the speakers’ lounge, that it was dehumanizing and gender/color blind and very hurtful to me specifically as a person who does have to deal with harassment regularly. I said I was glad she felt safe and that I wouldn’t have sent 22 women to the event if I didn’t think it was safe for them either. So who was she talking to?

'I felt that it was a personal attack (whether or not intended as such) since I was the main public representative of Skepchick at the event and it said ‘skepchick’ on her shirt and I told her that. I know she had a right to wear that shirt even though it was hurtful. But one day would have been enough when she was at the podium to send her message. To continue wearing it every single day, especially after I had expressed how upset I was with it, was cruel and shortsighted to say the least. That was very, very disappointing since I used to have a lot of respect for her. But there were so many detractors there that I’m sure she was getting a lot of love for slamming “skepchicks” everyday, and so my feelings were the minority and so became irrelevant.

'It’s this kind of dehumanizing and angry sports-fan mentality that is driving people like me away from this group of skeptics. And I am one of the people actually doing something quantifiable with the grants (which I plan on continuing to do btw.) Seriously, imagine if half the energy used to make angry shirts and fake websites were dedicated to helping me send women to science events or to do any sort of good in this movement. We could change the world. Skeptics are supposed to fight back against psychics and scam artists, they aren’t supposed to make people like me cry and leave events early. We need to stop the harassment and hate and this sort of instigating should not be tolerated by a group of rationalists. It is certainly not going to be tolerated by me.

There was definitely an us against them feeling that I personally experienced at the event, with groups of people who wouldn’t get within 10 feet of my table. Many identifiable online FtB- and Skepchick-detractors and their friends. Oh and there were undercover harassment people, which just seemed so strange and creepy to me. I was told there were 19 people secretly monitoring the event for harassment but no public policy or message on how to report incidents other than some info hidden on the JREF website under FAQs that I never saw. I only found out about this after I was in tears in the speakers’ lounge with a few people and suddenly a super-secret harassment specialist team was brought in to talk with me. After I reported to them that the TAM twitter feed with the anonymous blogging from the event and Harriet’s shirt had upset me to the point of wanting to leave, I had security cameras trained on me and my table where I sat with my mother the entire time. A security/harassment person checked on me regularly. They said I was being monitored and recorded. It was intended, I was told, to help me feel safe but instead it just exacerbated the stress I felt. I changed my flight and left a day early."

As is happening with more frequency, Roth's histrionic absurdity was called out for what it was by the bulk of the community. As per standard response to these situations, Roth followed up with a comment adding post facto embellishments (a technique mastered and advocated by Rebecca Watson) to add weight to her perceived grievances, with some added freefromthoughtblogs patented non-apologies

Surly Amy says:
July 18, 2012 at 9:42 am: Just some facts: I was an official sponsor of TAM, you can even see my business name printed in the sponsor list in the program. That should not even matter but I noticed some comments had that information incorrect. I was also a speaker on a panel about skepticism and the humanities.

This was not the only incident that happened to me at TAM where people were targeting me with personalized items meant to mock or diminish my presence. I only bring up the Harriet Hall instance because she is already in the spotlight as a leader in our community and because she was someone I looked up to. The other people who targeted me don’t deserve our attention at this point. So know that just a ‘silly tshirt’ did not reduce me to tears. Sadly, there was a lot more going on.

I have a lot of respect for Harriet, I hope that at some point she will realize that she could have sent the message she wanted without using the name of the blog I write for in the wording and that it was unnecessary. I think that gender/sex/color blindness etc is not the road to enlightenment but I respect the fact that that view was necessary for some to overcome certain obstacles in the past. It’s an outdated view, but I understand where it comes from. I hope that Harriet will realize why it was so hurtful and why I was offended by both the front and the back. Some of us have been harassed at events and do not feel safe. The shirt was also hurtful to those in that context as well.

As for people being supportive, yes many were. I am a longtime attendee of TAM. I am a public skeptic. I have many fans of my art and writing that collect my work there. I am very grateful for that. Those people are absolutely wonderful. I personally thanked every single one of them. It is because of those people and my grant winners that I went to the event and why I stayed as long as I did. This does not diminish the fact that there was an extreme undercurrent of ‘othering’ and angry divisiveness swirling about me the entire time. It was very, very stressful.

I am still very upset by the events that transpired last weekend. All I know is that we should as a community strive to be better than all this. I will continue to try to be a better person and I will continue to try to help other people get involved and to set an example of kind, productive, proactive behavior in hopes that more people will follow my lead than the those who want to mock and belittle. 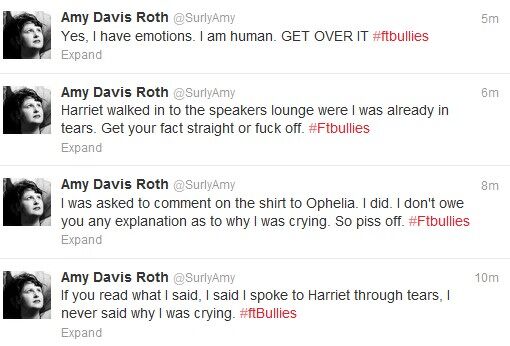 Editors' note - it was implied earlier that an incident of freefromthoughtblogs comment revisionism had purged the comments in this article. This was an error - FfTB comment handling code changes comment permalinks when comments roll over into more than one page, e.g. url/#comment1234 becomes url/page-1/#comment1234. In this instance, FfTB are innocent of comment tampering. So far. The links have been corrected.

Community content is available under CC-BY-SA unless otherwise noted.
Advertisement