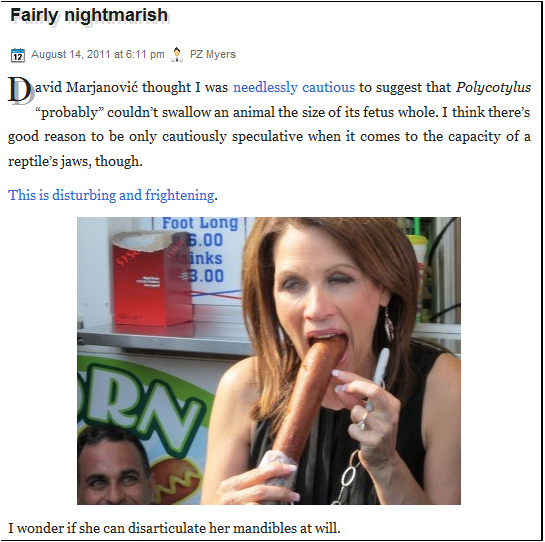 While the main article is content to equate Bachmann to a reptile, the comments section wastes no time in degenerating to highschool football locker room pornography references, induged by all, male, female and PZ Myers himself. Until a stern reprimand is issued at comment #91 -

RahXephon, un féminist nucléaire says:
15 August 2011 at 10:22 am 'Atheist men are always loudly complaining that women never want to participate, and we just had a weeks-long battle over this Elevatorgate shit, and I thought maybe at least PZ got it. Then you post something like this so you can go “HA HA MICHELLE BACHMANN’S UGLY AND OLD AND SHE’S STICKING SOMETHING THAT LOOKS LIKE A DICK IN HER MOUTH HA HA IT IS TO LAUGH!”

At which point the entire forum turns about face 180°in unison and begins decrying the vile misogyny of it all, ultimately prompting a PZ Myers retraction -

Of course, this kind of fine balancing act between juvenile titillation and terror of offending the rad-fem readership is nothing new. What is interesting in this instance is the sheer precision and stunning speed of the tightly drilled groupthink demonstrating itself in such a clear way - all the while maintaining that FTB/Pharyngula lives up to the claim of being for independent freethinkers.

Finally, note PZ's carefully chosen, not-polagetic words; "it was too easily misconstrued". Get that, you uppity feminists? It was your fault that you misunderstood the purpose of PZ's post. He knew he wasn't being sexist. Naturally, he get's away with such shaming language because, well... He's PZ.

Retrieved from "https://phawrongula.fandom.com/wiki/The_Michele_Bachmann_Hotdog_Incident?oldid=4848"
Community content is available under CC-BY-SA unless otherwise noted.